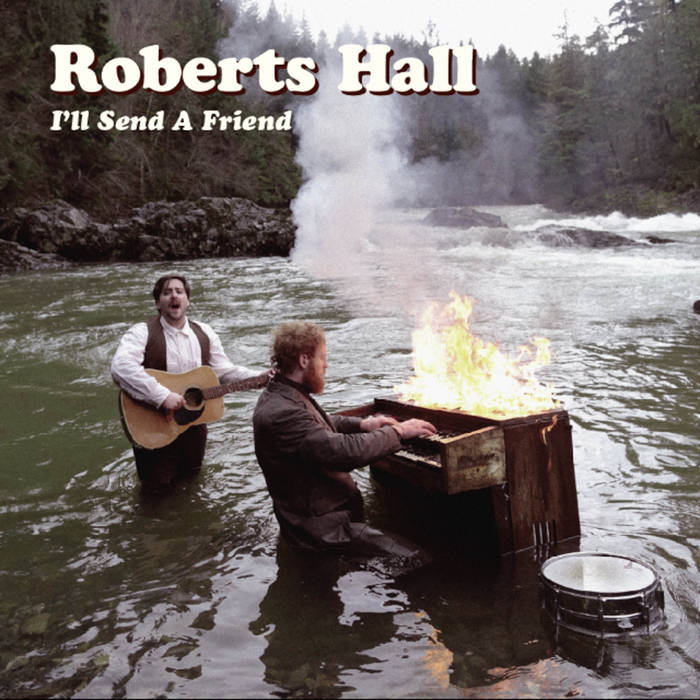 ROBERTS HALL possess a sonic identity entirely their own. Beautiful, emotional, occasionally humorous and an unfailingly engaging listen. Their debut album,“I’ll Send A Friend”, arrives fully formed on this wonderful CD.
ÉTIENNE McGUIGAN (guitar, lead vocals) and BRENDAN HOLM (drums, synthesizer, guitar, vocals) are locally storied, workaholic musicians in their hometown of Nanaimo on Vancouver Island, each involved in numerous other diverse projects. Yet when working together they are onto something very special indeed, delivering a beautifully conceived collection of memorable, oft-anthemic material on I’ll Send A Friend.
Following the tantalizing introduction to ROBERTS HALL’s fascinating world that was 2014’s 5-song Animal Encyclopedia EP, the glorious I’ll Send A Friend further hones and explores their intriguing blend of indie rock and a wide spectrum of roots music. Skewed blues (The Actress), Giant Sand/Sadies-esque alt. country (Holm’s Nothin’ Worse and Castle of Dreams); intense, epic rock (Toxic Love/Song in C), and even foot-stompin’ gospel (The Lord’s Lament) all have a part to play on this audacious, widescreen opus. Kicking off with the rollicking road tale Anacortes, WA., I’ll Send A Friend is a thrilling journey for every second of its 45-minute duration.

Bandcamp Daily  your guide to the world of Bandcamp

Featured sounds by K.Spark and WIZDUMB, plus Basi joins the show to discuss his latest release.